CIO50 2019 Ones to watch: Mike Jenkins and Jeremy Nees 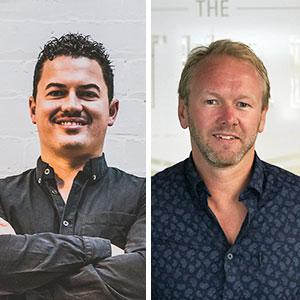 Mike Jenkins says the Instillery had a record setting year as they established themselves as New Zealand’s leading consultancy, migration, and managed service “multi-cloud” provider and cloud brokerage.

He cites two major developments that had an impact on the company and their customers.

First was the merger of the Instillery in mid-2018 with Vo2, a systems integration and managed services provider. The second was their creation and productisation of ‘Fastpath’ cloud feasibility assessment and migration plan.

The merger, says Jenkins, catapulted the Instillery from a technology startup to an enterprise class provider with over 100-full time staff across New Zealand and the UK.

He says a significant portion of their clients are New Zealand’s largest enterprises and government agencies.

They were delivering between five to seven new “feasibility assessments” per month, and but inbound demand for these assessments doubled over the past year.

Chief technology officer, Jeremy Nees, played a key role in the development of FastPath, as well as other innovations in their service portfolio over the past two years.

Nees says a trifecta of critical areas were holding back 90 per cent of their client’s ability to maximise the benefits of the cloud.

These are traditional approaches in networking and security, and lack of visibility and control for organisations that are moving into the public cloud. As a result, a lot of these organisations went into BYO cloud, and didn't realise the benefits of the technology, he says.

“Our innovations come from solving real-world problems for our clients,” explains Nees. “The services we have created are a direct response to gaps in the market, where customers were unable to get the flexibility and velocity they needed for moving into the cloud.”

Nees says the Instillery has developed its own ‘co-pilot’ support model.

This is a shared service management model that was created from the frustrations customers faced with traditional support models.

Nees says traditionally, tier 1 systems integrators and managed service providers have a track record of engaging and “doing it to” an organisation, fundamentally holding the controls of a clients ICT at ransom - creating an infinite loop of reliance on that particular provider. “There is zero client enablement,” says Nees.

Instillery’s co-pilot approach looks for any/all transferable skills to then develop, level up and accelerate a client’s internal capability to a point where the client is not only “self sufficient” but able to maximise the use of the technology.

“This approach has seen us massively differentiate from the competition but more importantly, from a culture and philosophical approach it absolutely aligns to our mission of enabling our clients to dominate both here and on the global stage,” says Nees.

His team also developed Clearstate and Pipeline. Clearstate is a SaaS tool that provides an intuitive cloud management interface, reducing complexity when managing public cloud. Pipeline is a CI/CD management SaaS tool, orchestrating the creation and integration of CI/CD components for development teams.

The Clearstate and Pipeline apps were developed alongside customers TSB Bank and Fonterra, productised and then taken to the wider marketplace in New Zealand and globally. The service was launched at the AWS Re:invent user conference in 2017.

Jenkins notes that the ideation and creation of these services added new monthly recurring revenue of 15 per cent to The Instillery’s annual revenue in 2018.

He says in the past year, the company has also established a foothold in big data, AI and machine learning. An example of this is The Instillery’s recent work with Auckland Council, Tauranga City Council and Department of Conservation as part of the Smart growth portal initiative.

Apart from setting industry benchmarks for cloud service providers, Jenkins says the company had another opportunity to “flip the traditional suit and tie IT systems integrator mafia market on its head.”

Early this year, The Instillery moved its global headquarters from Auckland to the Waikato.

Jenkins says that establishing global shared services in the regions provided significant benefits for their clients and the company.

He says the move reduced the total burdened cost of the business and allows them to rapidly grow and expand without external funding and at the same time reduce the cost of acquisition for their customers.

Nees says the expanded Instillery team needed to maintain a highly collaborative and challenging culture as they fundamentally looked at how they could do things differently.

He says it is important for people to feel safe taking risks.

“Failure need not be seen as fatal,” he says.

“In fact, with the right culture, it is seen as a positive because you are brave enough to try something new and challenge the norm. Constantly reinforcing this in the way we work and talk provide models for the team on how they can contribute to their own growth and never stop learning.”

“At The Instillery, everything we do is around emerging tech and that comes with its own set of challenges as we push public cloud services, SD-WAN and cloud security offerings,” says Nees.

He says it can be difficult to keep a team positive through these times and keep them moving forward.

“My learning from this is that it is easy to sit on the sidelines and do nothing, but it is much more rewarding to push what is possible and make a difference,” says Nees.

The last, he says, is a reference to Theodore Roosevelt’s ‘Man in the Arena’ speech in Sorbonne, where the former US president said: "It is not the critic who counts; not the man who points out how the strong man stumbles, or where the doer of deeds could have done them better…”

First, he says, “you have got to admit your mistakes.”

This happened during their integration of two businesses, without fully considering its implications for the culture and teams.

“However I was happy to put my hand up to the respective teams and board during this process, “pump the breaks” and refocus to ensure integration success. Quite simply, we initially tried to move too quickly,” says Jenkins.

Post-merger, he says, they focused on identifying outstanding talent across the organisation, so they were able to fill critical roles in the leadership team.

“Just because I started the Instillery in 2013 and have literally performed all roles that exist today at one point or another, doesn’t mean that I should always be the way or that I necessarily know best.”

“It took me a while, too long, to let my legendary team loose and it was the best thing I ever did for our business,” he says. “With a bunch of experts at the helm why wouldn’t you?”