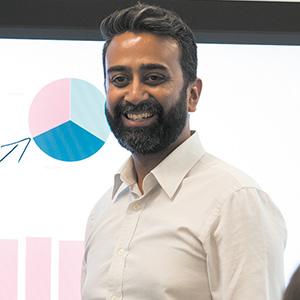 Nikhil Ravishankar deconstructs one of the newest role in the executive suite - the chief digital officer.

Vector is New Zealand’s largest distributor of energy, delivering energy to the more than 1.3 million people that live and work in the Auckland region.

At Vector, Ravishankar’s key focus in his role as CDO is introducing and enabling the company’s digital strategy.

This strategy, he explains, is based on best-practice principles of focusing on customer experience; design-led thinking; enabling new technologies; agile development and high-cadence deliveries; real-time data-driven decisions allowing for 3rd-party innovation; and "following the money".

He says this strategy is now well embedded at Vector, and provided the framework for the ongoing introduction of a steady stream of innovations.

For Ravishankar, the continuing focus on innovation is critical, particularly in the electricity sector where the way in which people use, control, and interact with energy is rapidly changing.

Gone are the days where innovations were the monopoly of large asset-heavy organisations, he says.

New technology like cloud computing, robotics, artificial intelligence, advanced analytics, and machine learning are coming to the forefront of the energy industry, thanks to smaller, more agile innovators and companies, he says.

By implementing its Digital Strategy and continuously focusing on the new energy future, Vector has shifted its thinking about the grid less as a regulated "electron corridor", and more as an open "internet of energy" platform, says Ravishankar.

The development, integration, and use of new energy technologies like solar panels, storage batteries, and peer-to-peer systems on our power network is trending upwards, he points out.

If Vector isn’t careful in how it architects, plans, and adjusts for this growth in new technologies – especially when you consider the rapid pace of innovation in energy storage and generation – the company runs the risk of stranding its assets and being ‘left behind’ in the new energy future, says Ravishankar.

‘The Internet of Energy’

Ravishankar says one of the biggest programmes the team has worked on is Vector’s answer to the ‘Internet of Energy’.

Called mDERMS (Distributed Energy Resource Management System), the Vector Digital team has been introducing (in partnership with Israeli company mPrest) a sophisticated management and control system powered by machine learning and artificial intelligence that can help the company cater to all of these demands in the new energy future.

The programme connects traditional infrastructure (like electricity lines and substations) with new energy generation and storage technology (like solar and battery energy solutions – otherwise known as DERs [distributed energy resources]) - onto one platform.

Across Vector's energy network, there are more than 4,000 solar panel connections, battery connections, and electric vehicle chargers. By 2020, Vector is planning for more than 40,000 of these DERs to become connected to the grid.

As a "system of systems", the mDERMS technology connects to these DERs, collects critical information, and enables real-time control of these assets. It will allow Vector to integrate, oversee, manage, and optimally power more than half a million homes and businesses, he says.

Ravishankar says Vector believes mDERMS will have a real and positive benefit for communities and will help democratise energy in Auckland.

But creating the platform is a complex task.

This involved frequent collaboration between Auckland-based engineers and those in Tel Aviv, Israel (where mPrest is headquartered) across different time zones and cultures.

The team were also utilising and integrating new IT concepts such as an open micro-service architecture, DevOps, and new exponential technologies such as artificial intelligence, machine learning, and cloud storage and management.

We had to develop a hybrid delivery model, as the line between engineering and IT blurred with the creation of mDERMS, says Ravishankar.

The collaboration, however, provided opportunities for cross-cultural mentoring and introduced a different mindset on vendor management.

“Our partnership with mPrest is an example of challenging the business to seek out other sectors and innovative companies for collaborative opportunities,” says Ravishankar.

“Where traditionally Vector looked within the energy sector and a traditional set of vendors for development opportunities, our mPrest partnership is the first time the company has sought collaboration from an unrelated industry to produce innovative work in electricity management. This was breaking new ground for the company, and I'm glad to have been able to lead that change in cultural thinking.”

The company has also trialled the ability to buy and sell power through peer-to-peer trading, which uses encryption and blockchain technology to allow users to better manage their demand and supply needs.

Vector has also installed solar panels, battery storage, and peer-to-peer energy trading technology in a housing project with Ngāti Whātua Ōrākei, which has allowed some residents to bring their power bill down to as low as $13 per month.

Vector's first chatbot 'Vicky' is now delivered into their Facebook environment to a closed group of pilot users. The bot will help answer queries about power outages on Facebook and other social media channels, he says.

“We are also developing an energy ‘skill’ for Amazon Alexa, which is another example of how we’re offering choice and control to customers over their energy use”, says Ravishankar.

Ravishankar shares some philosophies and principles in his time as chief digital officer.

“It's important to have a clear and open framework to be able to articulate a digital strategy that acknowledges the rapid change in the sector, but also puts a stake in the ground to be able to clearly outline progress,” he says.

He advocates creating a workplace culture “obsessed about end-customer outcomes and experience, and embedding continuous learning, is key to building a relevant and effective digital unit”.

“Building a high-performing digital team doesn't happen by chance,” he concludes. “Sometimes you need to be brave as a leader and stick behind your choices to create the right mix of people.”