Our goal is to become one of the best indigenous tertiary institutions in the world, says TWoA CIO Grant Strang. 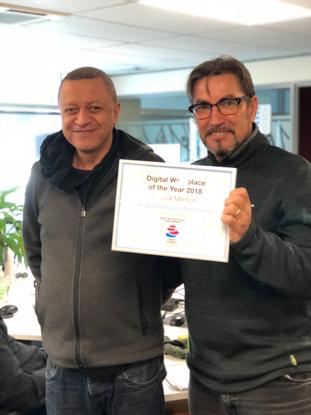 Te Wānanga o Aotearoa has been cited for its user engagement programme in the annual awards by the Digital Workplace Group for organisations implementing high-performing digital workplace environments.

Grant Strang, executive director information technology (Tumuhangarau), TWoA, says the Maori tertiary education provider was given a special mention for its ‘engagement and access to digital services’, at the recent award ceremonies in Chicago.

“This award aligns to our value of Kotahitanga and shows that if we join and collaborate together we achieve great things,” says Strang, who is one of the leaders in the 2018 CIO100.

The awardees were chosen by a panel of judges that included Paul Miller, CEO of Digital Workplace Group, and senior digital workplace practitioners such as Pete Fields of Wells Fargo, Laura Opsahl of 3M and Kerry O’Donnell of Estee Lauder Group.

Strang says the entry sent to the judges explained some of the work TWoA is doing in its goal to become one of the best indigenous tertiary institutions in the world.

He describes some key portions of their entry:

“We determined personas such as 'Tumu' (executives), 'Kaiako' (tutors), 'Kaiwhakarite' (Administrators), 'Kaiwhakahaere' (Managers) and 'Kaimahi' (employees), within the business and sought feedback from those personas.

“Because the interface was easy to create content pages, we were able to quickly develop the pages and get feedback from our personas and adjust the content to meet their feedback,” he adds.

“Before going live, we had over 200 employees from 1600 who had already seen and had a say in the development of Te Kōpua. We created a Yammer group where we provided updates and every two weeks we had showcases which highlighted the progress.”

Alex Garkavenko is promoted to vice president product at Dexibit. She began as a data architect at the company, which provides analytics software to museums and other cultural institutions.

Sharron Botica has been appointed chief customer officer at AIA. Prior to this, she was with Sovereign, where she was CCO for nearly two years.

Peter Mangin joins Coretex as IT manager. Before this, he was CIO at realestate.co.nz.

Agile coach Kirstin Donaldson is now with Equinox IT as principal consultant, based in Wellington.

Donaldson joins from Flux Federation and Powershop. Prior to that she was the general manager of f Boost New Media, a recognised Wellington Agile coaching and web development company.

"Implementing Agile practices helps teams build and deliver the right thing whilst maintaining quality in the leanest way possible,” says Donaldson. “It's also about empowering teams and creating resilience through that empowerment."

Dave Howden, head of cloud for Umbrellar, has announced the company is adding Azure services to its suite of products available for New Zealand companies eager to make the leap into digital transformation.

“With the Umbrellar Cloud powered by Azure Stack now generally available for Umbrellar authorised partners, and alongside our Azure and the Microsoft 365 suite of services, we are truly driving towards our vision of a truly Cloud-enabled New Zealand,” says Holden.

Fuji Xerox New Zealand and New Zealand Office Supplies have announced they have deepened their existing partnership. Peter Thomas, managing director, Fuji Xerox NZ, says the new partnership will give their customers access to the best local office supplies offering in the New Zealand market coupled with excellent service levels. “It will strengthen the range of office products available and will provide all our customers with a fresh e-commerce experience.”

The change to the partnership will offer Fuji Xerox customers improved access to a wider range of high quality products. The partnership sees NZOS gain exclusive rights for the sale of Fuji Xerox branded papers including wide format and speciality papers.

Adrian Jones has been appointed executive vice president for Asia and Pacific and Japan at Automation Anywhere, a software provider in robotic process automation (RPA).

“RPA is already bringing to life a new, digital workforce designed to automate processes and elevate human work,” says Jones, who has led strategy and sales with leading technology companies in Asia Pacific and Japan (APJ), including Hewlett Packard Enterprise, Symantec and Oracle.

Winners of the sixth annual KiwiNet Research Commercialisation Awards, designed to celebrate impact from science through successful research commercialisation within New Zealand’s universities and Crown Research Institutes, were announced at a recent reception in Auckland.

“The 2018 awards have given us more hope than ever before that the future of this country is through innovation and commercialisation,” says lead KiwiNet Awards judge Dr Andrew Kelly, executive director at BioPacific Partners. He is joined on the judging panel by Helen Robinson (ONZM) executive chair at Organic Initiative; entrepreneur Paul Dyson; and Veronica Harwood-Stevenson, founder of humble bee and Spindle Fibre Films and a member of the Return on Science Momentum Investment Committee.

KiwiNet CEO James Hutchinson says, “The winners represent amazing teams from around the country who are creating commercial potential from their highly innovative science, which will help enable a higher achieving New Zealand. All of the finalists’ research projects and new technologies we’ve seen today have the power to help solve global problems and kick-start valuable new companies.”

The Kiwi Innovation Network (KiwiNet) is a consortium of 16 universities, Crown Research Institutes, an Independent Research Organisation and a Crown Entity established to boost commercial outcomes from publicly funded research by helping to transform scientific discoveries into new products and services.