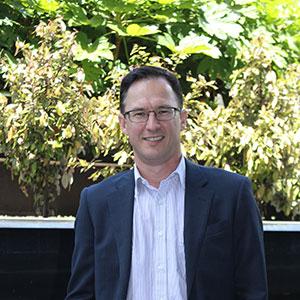 Thomas Hyde operates across different levels at Beca, leading a team with a diverse and strategic portfolio and over the past year, influenced the organisation to modify its mission statement.

He is also group director, responsible for defence and national security practices across Beca, one of Asia Pacific's largest independent advisory, design and engineering consultancies.

Early this year, he was appointed to the inaugural CDO role from being CIO - one of the handful of global CIO roles for an enterprise with headquarters in New Zealand.

His concurrent roles all have future focus for Beca, from a technology perspective and as a professional services firm.

“In my CDO and CIO role I keep my peers and the CEO informed of threats and opportunities, and marshal all large scale technology investments through the executive approval process.”

“This often involves an educational or upskilling approach, such as highlighting the implications of cyber threats, privacy obligations and digital disruption,” he says.

He is one of seven directors on the Beca group board. This role, alongside general director duties, is to provide guidance on the future direction of the firm.

Last year, he arranged for the CEO and chairman at Beca to attend executive briefings with Microsoft and Autodesk.

This ultimately led to two executive retreats for Beca executives and directors that focus on the company’s response to digital transformation. This has also resulted in a reorganisation at Beca which included the establishment of the chief digital officer role.

Lessons and actions from the top table

Hyde and his team work on projects across the globe, a portfolio that proved critical in the evolution of the corporation's mission statement.

He says in the past two years, Beca had used Microsoft Azure to develop and deploy their first global digital service offerings.

One was for a seismic retrofit decision support tool for housing repairs in the Netherlands, and another to provide a capital programme management tool (ProjectFlo) to a global multinational company. The platform was deployed across 230 sites in 100 countries in April 2019.

This, he says, is a subtle yet significant pivot for Beca, which is celebrating its 100th year.

ProjectFlo, he explains, was their capital programme management offering.

It started as one of their best innovations, solving a problem of one of their clients. Beca was helping this client with a lot of projects across several of their manufacturing sites.

“It became clear that at a senior management level, the client was struggling to understand what was going on,” he says. “We developed a visualisation tool, funded from a technology innovation fund we make available for this sort of experimentation, and applied it to this client and also started to explore its use with others.”

“Over the next few months we could see there was a niche in the market between the complex off-the-shelf programme management tools and simple spreadsheet tools people use, for capital programme visualisation and management solution.”

“From a benefits perspective, this looked like a great opportunity to leverage our traditional capital project engineering and management services into a scalable global platform-based service offering, with the potential of a new business model and diversification of revenue and profit.”

The next step, he says, was to see if they could sell this service to a multinational client. They did, and persuaded the client to invest in a pilot, during which they integrated a lot of functionalities into the product.

Parallel to this, they were experimenting with the use of Microsoft Azure as the vehicle for the product offering.

This looked like it had potential for a scalable new business, and subsequently became one of the early candidates for the recently established New Ventures Accelerator (NVA).

“NVA was set up to find scalable businesses and ProjectFlo had the benefit of a couple of accelerator sprints”, he states.

“We are now at a point where the solution has been deployed globally, and has a pipeline of new clients, and is generating a solid revenue stream,” says Hyde.

“For us it is a great proof of blending our traditional services with digitally enabled ones.”

He says this experience required them to address how to deal with product-based services in what has traditionally been a business that sells consultant hours.

They had to implement 24x7 support to end users around the world, put in place a different dedicated sales team, and look at product-based investment approaches.

“Adjacent to this, and with the confidence we have gained, we are selling a range of digital twin services to clients around the world, including VR/AR training solutions to GSK Pharma in Singapore,” he says.

For the latter, they are leveraging Beca’s new Singapore Digital Innovation Hub which is focused on creating new services targeted at smart cities and smart manufacturing.

“We are increasingly applying AI and data analytics in these solutions,” he says. A new AI offering is public stakeholder engagement via chatbot to inform infrastructure investment decisions.

All of this service development activity has led to Beca becoming a Microsoft Independent Software Vendor, he states.

“What’s important is to model the behaviours you expect your team to demonstrate, and to create an environment where people feel safe expressing themselves,” he says.

He inspires people with a people-centric approach to technology, or “balancing hype with what is value adding”.

He does this through podcasts, presenting at forums such as Beca’s annual leadership forums and also at external events.

He says innovation and entrepreneurialism are areas that they are focusing on.

These two areas have been the bedrock for the business, but are more challenging to maintain as they have grown to 3,500 people.

To assist this, he has sent his team members to Singularity University.

“We also run ‘Inevitable Futures’ workshops to open peoples’ minds up to new ways of thinking,” he says.

Over the past year alone, around a third of Beca employees have joined these and other innovation workshops.

As part of his board role, Hyde visits Beca offices every year and uses this as opportunities to showcase their technology and innovation agenda.

Hyde, who has a doctorate in chemical engineering, became CIO after working in a range of executive roles at Beca’s headquarters and working out of overseas offices.

An early lesson for him as CIO was the importance of translating the impact of technology into what it means in terms of business benefit.

“Just because something is possible with technology doesn’t mean it’s worth spending money on,” says Hyde.

He cites how he applied this concept to the most recent large scale technology investment at Beca, the three-year Microsoft Office E5 Enterprise Agreement.

The agreement has greatly improved the security posture at Beca, he says.

When initially contemplated, this was to be a straightforward renewal of our prior enterprise agreement, he says.

However, Microsoft has recently bundled in a range of security products.

“We have for some time been working on our security maturity – as part of this we had spent a lot of effort on our enterprise risk management framework, with cyber threat turning up at number one on our list of top 10 risks.”

When the Microsoft investment came up, he had extensive conversations with the executive team because the security component was an unplanned investment.

“However, we were able to correlate the proposed security components with key security controls, several of which were planned to be implemented in the future but did not yet exist, and show the tangible improvement the investment would create,” he explains.

“This allowed the CEO and executive team to accelerate the improvement of our security posture and make the E5 investment,” he states.

“We have subsequently improved our ICT security as a result. This, to me, was a great demonstration of how far we have come with business-led ICT investment decision-making.”